The Dolomites' Japan Years I in the 14th annual Independent Music Awards:
for Album Art/ Design 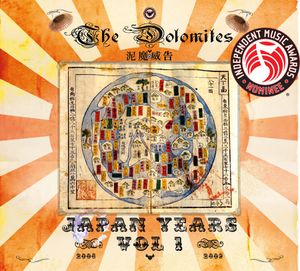 Originally founded in Portland, Oregon and currently based in parts of North America and Japan, The Dolomites are a Tribal Mestizo Folk collective that fuses together the traditions of Japanese, Rumanian, Balkan, Cumbia, Tzigani, Dub, Punk, Alternative, Electronic, Roots, Bass and Sub-natural mystic genres. Instrumentation varies from show to show and is primarily : Accordion, Vocals,Tuba, Drums, Percussion, occasionally a variety of Electronic Elements with DJ collaborations, Violin, Koto and other Melodic Instruments. Lyrics are in Japanese, English, Spanish, and tribal scatting. The Dolomites currently have a rotating roster of about 70 musicians depending on the city and country the Dolomites perform. Stevhen Koji Baianu plays accordion, vocals, violin, bass, drums, percussion, koto, etc. and is the founder, producer, and director of the current Dolomites

The Dolomites are also currently working diligently on a project that we cannot reveal details about until project is closer to being launched.
2015 marked the release of the Japan Years (3 Volume Trilogy EP of songs recorded mainly in Japan with the Dolomites).

Alien Arts Alliance will release the Dolomites - "Soundtrack Years" in 2018. Compositions and productions of Stevhen Koji Baianu for TV/Film/Game music.

A Japan Tour in 2018 and other possible countries to be announced...  Feel free to sign up on our mailing list for updates on new treasures, material and Dolomites News...

Go to BIO for Full Bio in English and Japanese

This third composition on Sound Tracks [Yokai: Spirits and Demons]
was originally created in the gritty neighbourhood of Gomez Farias in
Mexico City... and eventually completed after going through Playa del Carmen,
Brooklyn, NY, Beaverton, OR and finally Merida, MX.
One of our favourites on this particular release that Alien Arts Alliance
will release a 7"vinyl of this track with rare Dolomites B-sides later this Autumn
Click image for Free Download track link.

This week we release the 2nd title in the Sound Tracks series ... "the Bad Man"
The background sounds as well as the piano in this particular piece come from the city of Merida in Yucatan, Mexico
as it was recorded and produced there in late 2014-2015.

The Dolomites : Sound Tracks Volume I

Pleasant greetings... In honour of love, union, and death. The Dolomites are commencing their release of Sound Tracks Volume I.
Free Downloads of Stevhen Koji Baianu's tv/film/game compositions will be available throughout 2016 through on our bandcamp site.
A limited 7" vinyl of re-mixes and rare b-sides will be released later this year on Alien Arts Alliance.
More Free downloads, Japan and North America show dates, tours and news to come in 2016! Saludos!
Click here or on image for Free Download Link

やめちゃ駄目ー"Never Give up " new acoustic video ....

With the release of Japan Years in a few weeks 10/10/15 , here is the newest acoustic video for Yamecha Dame -"Never Give up".

US dates TBA soon.  From the Yucatan with love. ...

分かんない-Wakannai ? New Musik Video by the Dolomites and Ken Nishikawa.

The Dolomites newest musik video for " 分かんない?" filmed in one of the busiest interections in the world, Shibuya Hachiko premiered today on PopMatters.com. . .
Enjoy the Japanese Balkan Drum and Bass with Mr. Pinki navigating his way through the streets of Tokyo alongside the Japanese Police.

As we have been in transit the Japan Years III preview has been delayed until now- but here is the new Japanese Space Cumbia track ヤットヤッタ。https://soundcloud.com/dolomites/the-dolomites-yatto-yatta-finally-done
The closest English translation for Yatto Yatta is [Finally Done] and was originally released on the Dublavixx Demos back in 2006. Re-recorded in 2015 for the Japan Years Trilogy coming out this summer. Stevhen Koji Baianu plays accordion, bass, vocals, percussion, gong, theremin, beat production…

March 26, 2015 - The Global Music entity, the Dolomites who are based in Mexico, Japan, and the USA were named by Music Resource Group (MRG) as a Nominee of The 14th Independent Music Awards (The IMAs), the influential awards program for independent artists and releases. Independent Music Awards nominations in more than 80 Album, Song, EP, Music Producer, Music Video and Design…Read more

The Japan Years Trilogy will finally be released this year in its entirety. First in Japan in June, then in August Globally. However The Dolomites will be releasing a track and the story about each song in the Japan Years Trilogy every 11 days starting today until the Global Release. Enjoy, and stay tuned for more news about the Japan Years and Japan Tour 2015.
止めちゃ駄目ーYamecha Dame [Never Give Up] Track 2 Japan Years I
Originally written and recorded in Brooklyn, NY in 2003 on "Darumanian Chophouse" [out of…Read more

The Dolomites are almost finished in the studio with Japan Years III. Previews should be posted next week !

Japan Years Vol. III coming out soon with volumes I and II...

The Dolomites Japan Years Trilogy is nearly complete and should be available in Japan by late Spring and the rest of the world
by late Summer... Stay tuned for preview tracks in the following weeks ... !

Japan Years Vol. I and II to be released with Vol. III ...

Japan Years Vol. I and II to be released with Vol. III ...

Last NYC Show for the Year ...

After party will be at Mehanata as our friend Kosta Kostov will be djaying until the morning!

Here are some selections from the Dolomites 2014 Japan Tour Comment Book.

Very nice to look at these now,,, Thanks to all those people that made drawings and left their comments in this book… SEE you Next Year!!!

For the 1st time in 2 years ... The DOLOMITES return to the Big Apple!!! Dates and details below!

Sad The Dolomites 泥魔威告-ドロマイツ news ... とても悲しい事なんですけど、これからナツミスズキさんがドロマイツのライブにも参加する事をしませんです。ナツミさんの素晴らしいダンスと出演に大感謝です。お疲れ様、本当にご苦労様でした！We Will Miss you. これから色々もっと良い事が有るように祈ってます。
The Dolomites are very sad to announce that Natsumi Suzuki had her last show with us in Oita and will no longer be performing with the Dolomites for the time being. Thank you Natsumi for all your great performances , hard work, and contribution with the Dolomites, we shall miss you very much. Love and Respect and Great Fortune to you… Read more

A nice up from Tokyo Metropolis Magazine. Many thanks for your support! The Dolomites The first wave of the Japanese-Gypsy diaspora ... http://metropolis.co.jp/arts/music-feature/the-dolomites/